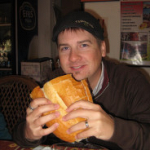 Hi, welcome to Killer Bunnies Wiki! Thanks for your edit to the Bunnies page.

Hi MisterHaan. You and I appear to have some disagreement on card titles. I'm primarily going by the "official" card titles here. For example, my opinion is that the articles "A, An, and The" should not be part of the names, since Creative Team Alpha lists cards like "The Magic Fountain" as "Magic Fountain, The". This is important when people use a card like "Alliteration Situation" (from the Ominous Onyx deck, which you indicate you do not have) where the first letter of a card name matters.

As such, we should probably borrow some naming guidelines, adapt them to Killer Bunnies, and post them. MagicCarrotAdmin 23:39, December 28, 2010 (UTC)

I was going by what's actually printed on the card. I think it doesn't look good to put ", The" at the end of a name for a card, but it doesn't look like anybody's suggesting that anyway. As far as I'm concerned, either "The Magic Fountain" or "Magic Fountain" are fine as the page, but there should be a redirect for the other. I didn't look at Alliteration Situation but that sounds like a good argument for making the actual page not start with "The" but making sure there's a redirect. I'll use that going forward and will change back as I come across them.

I have images for all of the promo cards that I haven't uploaded. I should have the Chocolate booster in a few weeks. Let me know if/when you get to the point where you need images for those.

I dont believe we've met. I used to edit on the KB wiki a While back and now i'm editing again. So anyway,

Do you happen to know how to change the background of the wiki. MagicCarrot said you might know.

i remember you from before -- good to have more activity on the wiki! for the background are you looking at putting in a background image or just changing the colors? either way i’m sure i can figure it out, but we might need admin rights to do it. the only guy with admin rights currently hasn’t been around in over 2 years, so i’ll put in a request to get admin rights.
misterhaan 14:53, December 5, 2011 (UTC)
Yes, I would be fine if you became admin. And I was thinking maybe a background image for the wiki. Perhaps pictures of the different types of bunnies. I would be happy to upload a background.
Semper fi 45 20:32, December 5, 2011 (UTC)

Congratulations! I think you've done a great job in moving this wiki forward! I look forward to the changes you have in store. MagicCarrotAdmin 14:38, January 30, 2012 (UTC)

Thanks both of you! For my first admin action I enabled badges, since I've seen them on other wikis and thought they were a fun incentive for contributing. Now I'm off to delete that category page I accidentally created with the wrong spelling...

Hi! I'm a new wiki member and so I'm still trying to figure out how some things work here. one question I had was How do I create a talk page? and also, I've made a lot of edits in other wikis as well, although I've only earned 2 awards. are the awards only for this wiki? Thanks! Hitoo (talk) 15:13, February 7, 2014 (UTC)User:Hitoo

To test whether using |game = Kinderbunnies would work and allow Kinderbunnies pages to follow established naming conventions, I created Sky Blue Starter Deck (Kinderbunnies) not realizing that I would then not be able to rename Sky Blue Starter Deck due to the perceived conflict. I will also leave this same message on User talk:MagicCarrotAdmin so that either of you could perform the rename. I should eventually have time to add the game parameter to all of the Kinderbunnies pages so they should then all point to the proper pages. Jkudlick (talk) 15:44, September 1, 2015 (UTC)

Retrieved from "https://killerbunnies.fandom.com/wiki/User_talk:Misterhaan?oldid=11726"
Community content is available under CC-BY-SA unless otherwise noted.